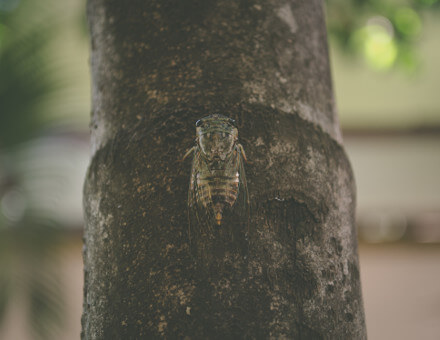 They share in common the Latin, emergere: bring to light; arise. Emergency holds within it and is nonexistent without emergence. It might seem that each gives birth to and envelops the other. And emergence, as unveiling, is no stranger to the unexpected and dangerous.

In the messes and unexpected graces of my and my clients’ lives, I’ve come to believe that we arrive in this world with (1) the longing to know ourselves wholly, (2) the very wholeness for which we long, (3) the map for becoming and (4) the imbedded celestial and earth-seeded impulse to migrate into the bones and beauty of who and what we have been all along.

The great mystics tell us that in order for the heart to open, for the brilliance of the heart to emanate, it must be shattered. It is said that the heart opens in one of two ways: through great pain or immense joy. Both catapult the experiencer beyond the ordinary moment, even beyond linear time.

Nearly twenty-five years ago, a cicada that landed on the fence in my backyard astonished me with a living metaphor of the rawness and mystery of emergence in the midst of my own emergency. I was in my 20s and in my third year of graduate studies at seminary. (I had decided to attend seminary within months of getting married and leaving an early career in television advertising sales.) By my third year of studies I was so depressed and pixelated by anxiety that I wanted (though surprisingly never attempted) to kill myself. My will to live had ghosted out of me. Weekly and twice-weekly therapy sessions and a psychiatric hospitalization afforded me only brief respites (though I’m sure that without them, I would have been an even lesser shell of a human). I tried at least six psychotropic medications, but all had intolerable side effects. I was bereft, and I felt unrecognizable to myself. I was terrified that my choices were to (1) live like this, which was no way to live or (2) die, because at least my physical death would be an end to what felt like a relentless slouching into quicksand.

One summer morning that was abuzz with high decibel cicada song, my eyes were drawn to a seemingly lifeless insect stuck to the fence in my backyard. It was actually a very active cicada, slowly cracking through its exoskeleton. During a span of two hours, I witnessed the cicada fracture and explode out of itself – its body that was sustaining the birth process while becoming an artifact. In movement and rest, this creature made of things breaking and being born pulled itself out of and was forced beyond its sheltering skin. Once free, the cicada surprised me. It didn’t fly away. It clung to its corpse. I don’t remember how long its wing-birthing went on, but I know those iridescent wings took time to dry and take shape. I sat immersed in this visual artistry, slipping into a realm of natural magic. I felt in and beyond my body, held by a love big enough to break me, heal me, and take me into its own unwavering and mysterious heart. And then, quite suddenly, the cicada flew away, up into the nearby willow trees.

I’ve read that Life has no opposite. It is the Whole and the All. Within Life, there is the ongoing cycle of death and birth. I knew that morning I’d be okay. I could see my own coming into being, my own death and birth within the orbit of Life. In the decades since, there have been other exposures and arisings that have thrown me to the ground and lifted me to the stars. I continue to be shown how that which must and will be brought forth is ultimately the Light that refuses to stop, demolishes our hideouts, eclipses our cherished theories and stories. And it doesn’t care about our social status or vacation plans. It is the perfectly soul-timed arriving of all that we are.

When the Light — the mystery of Divine Love — grows too big for the husk, that very Love holds tightly the husk that must surrender. And with fierce yearning, returns to us the determined eloquence of wings.

Your task is not to seek for love, but merely to seek and find all the barriers within yourself that you have built against it. - Rumi